It wasn’t spontaneous -MC Jason ‘Evo’ Evans insisted the audience sing before commencing festivities, but the serenade warmed our hearts nonetheless. Our MC  looked sharp in his suit – but sharp like a gangster or a bookie rather than lawyer or stockbroker. Coles Express manager Mikey shares a birthday with Schnitz N Tits and suited up and tied his long hair back for the occasion. Evo gave the VIP no love as he was introduced – asking what sort of sentence he received at his court appearance. Fellow VIP Hakka seemed to be having a grumpy birthday – stonewalling Evo on the introductory patter.  I tried a friendly follow up chat to see if everything was ok..and left wondering who shit on the Geelong shrink’s Schnitzel?! 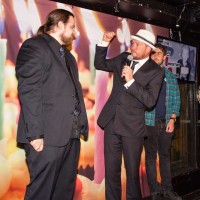 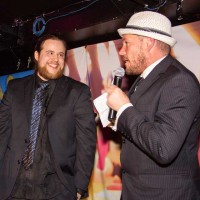 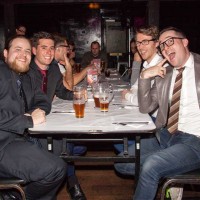 Our topless waitresses the Babelicious Barmaids often go largely unmentioned in these match reports. In fact the topless waitresses are the backbone of the evening – and our 5th birthday was no exception. Accidental ‘pantsing’ in a stage game? Hammered and handsy patrons (male and female!)? I am yet to see anything stop Schnitz N Tits topless waitresses smiling. These consummately professional party princesses have been putting the tits in schnitz n tits for 5 years and we thank them! 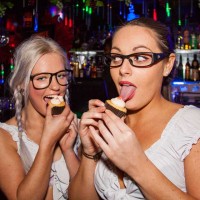 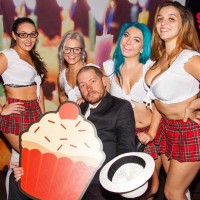 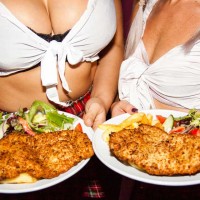 First showgirl out of the chute was the buff and buxom Miss Hunter. Tonight she chose a construction motif – coming on to the theme from Bob the Builder! The show was unsuitable for children but our 18+ Birthday party guests lapped it up! Smiling widely was Brad of the ‘Big Units’ table as Hunter used his belt to take him for a horsey ride. 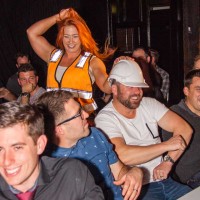 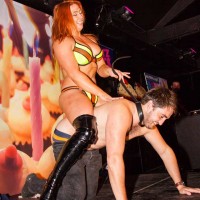 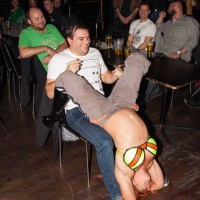 Isabelle Deltore was next to pass the jug. Despite slim pickings she went all out, once again, at our quincentennial. Issy’s pirate queen costume, complete with thigh high boots and skull and crossbones g- banger, were ceremonially discarded. Eventually Isabelle frolicked in the briefest of flesh coloured lingerie bottoms. Were those winking rhinestones on the garment, we wondered, or had she been vajazzled? 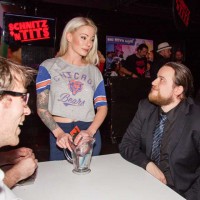 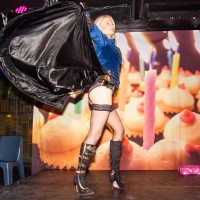 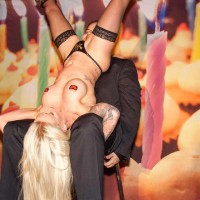 When the power chords of Metallica’s Enter Sandman rang out Issy really hit her acrobatic stride. She backflipped along tables and upended herself before Mikey – leaving the supermarket manager and birthday boy gasping between her legs.

The Babelicious Barmaids – Tonight topless waitresses Taylor, Georgia, Emma and Lucy donned the schoolgirl gear. Thanks to the ever modest, hardworking and friendly and foxy co stars of our birthday bash show

Book our beautiful topless waitresses for your private event