Mountain maidens resplendent in  ‘Dirndls’ (sexy national German dress) greeted us warmly as we entered the Bavarian beer hall for Oktoberfest Melbourne. The flirty Frauleins with their bulging bodices were a Wilkommen sight! Spring is about new beginnings and some stacked new waitresses seemed only fitting . With high spirited groups and a packed house it was a big night of bodyshots and Biersteins – the Babelicious Barmaids could hardly keep up! 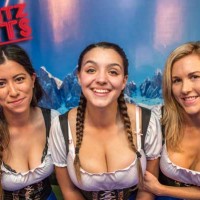 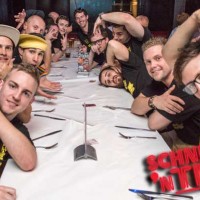 The first performer, Kaylee, entered as a demure Heidi to the backing of an Oompah band which cut to Rammstein as she ripped off the Dirndl and ripped into the raunch. Kaylee loves to get bucks and birthday boys involved. Showing that this wasn’t her first rodeo she rode dress clad Buck Russ like a bronco.As the party hotted up off came the Babelicious Barmaid’s snowy bodices, my eyes could hardly keep up with Oktoberfest Melbourne!

Hunter hit the stage in a Blue and Black  Bavarian getup – prancing, twirling and serving a beer from between her taut thighs for one of the boys from Sean’s birthday party. For Hunter’s next trick she called for a belt and was offered about 5 simultaneously as every bloke at Table 5 loosened their strides hopefully. She then involved a game chap from ‘All Round Together’ table in some light S & M and her next victim in some spectacular pyrotechnics! Gez from table 5 was there for her 30th and her girlfriends cheered as Hunter gave her some special attention. 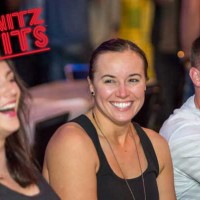 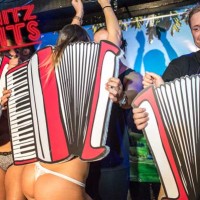 A particular crowd favourite among several Oktoberfest Melbourne crowd participation games was a Schnitz N Tits original entitled ‘Rockstars German style’. Bucks Pat and Russ were teamed up with our bar babes along with birthday boys and girls Sean, Icarus and Gez for some energetic ‘air accordion’. Gez was the crowd favourite but we got the feeling they just wanted to see the girl on girl action of her complimentary body shot. 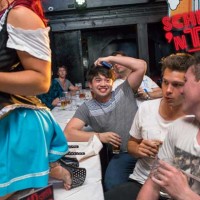 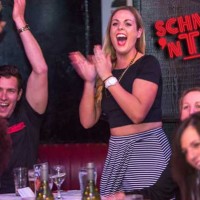 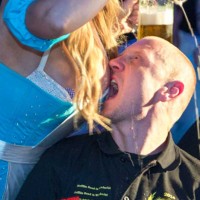 Once again the night ended with a Cherry on top. The sultry headliner took the stage in a sexy sky blue number, slopping beer from her steins but otherwise looking like butter wouldn’t melt. Gotta love the outfit changes. When the skirt came away to reveal a corset, sexy white schoolgirl stockings and red stilettos the butter not only melted, it sizzled. Buck Pat was thrown into the mix by his mates – dressed as a leprechaun and flat on his back with his beard askew and Cherry humping his beetroot red face, he resembled a squashed frog. Melbourne Oktoberfest at Schnitz n Tits runs for the rest of (strangely) October and should not be missed!

Check out more photos of our Oktoberfest Melbourne here!