I had a bastard of a week..But by the time I left my hot car in Lonsdale street on Friday night the sun was setting over Etihad stadium and I was smiling. The Friday night fun at Schnitz n Tits is the perfect antidote to work woes !

Beautiful Bunny Sara took me in hand when I arrived. Resplendent in black corset fishnets, fluffy tail and floppy ears she brought my date and I drinks to go with our piping hot Schnitzels chips and salad. The date went the Eggplant Schnitzel which she proclaimed delicious. I can’t go past the hearty Chicken Schnitzel.

As we ate our MC took the stage as a debonair but ocker Hugh Hefner. I can’t remember Hugh sporting a tam-o-shanter cap (a la Brian Johnson from AC/DC) but Jason obviously drew the line at removing  his signature headwear. He poked some fun at the bucks and birthday groups, ran down the order of business and, as I mopped up the last of my gravy, we were underway with the first round of stage games 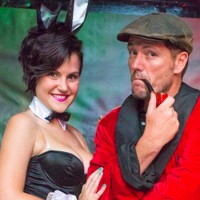 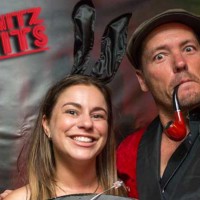 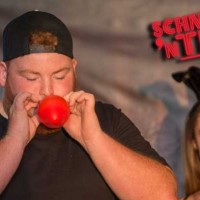 How quickly could you blow up a balloon til it pops, scull a beer then remove a Babelicious Barmaids bra using your left hand? These contests are usually a frenzied affair but the fastest of special guests competing in elimination rounds was Matt who got it done in 1m 40sec  with a suave calm to make Hef proud. Birthday boy Matt and policeman and buck Anthony were now set to face off in a sudden death final as the Friday night fun continued.. 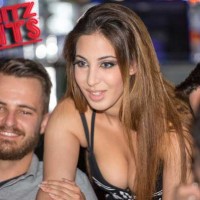 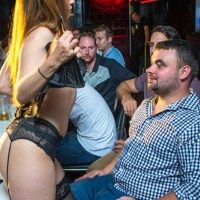 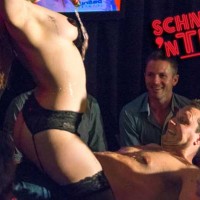 When the famous  Isabelle Deltore was announced for the finale I told my friend Anna, a Schnitz N Tits virgin, to prepare for something special. There’s no over-hyping the uber fit Issy.  She whipped an already rowdy room into a frenzy that could be heard all the way down King st. 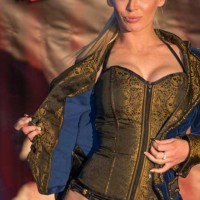 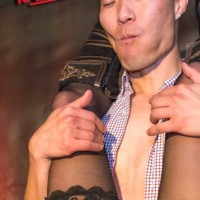 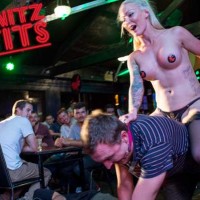 Isabelle rocked her version of a pirate costume (in a nod to next week’s classic costume theme: Saucy Sailor Girls. She menaced audience members with her cutlass before stripping off the captains hat and coat to expose herself as cabin wench in a lace up leather number – very authentic! When this too came off only a skull and crossbones ‘snatch patch’ remained of her modesty. She dripped hot wax on cop/buck Anthony, ball gagged buck Ben and took him for a horsey ride (complete with atomic wedgie) ..And then Isabelle discovered Jeff from the Wiggles in one of the bucks groups! She decided to ‘wake up Jeff’ by dragging him on stage for a finale which involved marshmallows, intimate areas and extreme athleticism.  Isabelle knows how to make a Friday Night Fun! 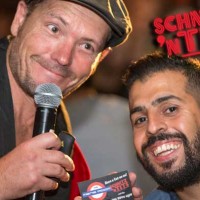 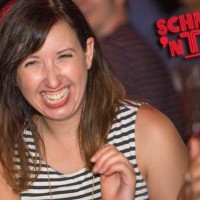 Special mention to the crew throwing a surprise bucks party for Alex – we applauded their intiative by getting Alex up for a bodyshot and a bosom massage from Babelicious Barmaid Bec.

I could go on..birthday boy Matt won the quiz by being secure enough to describe the taste of semen..

Girls night out group pashed on stage to win hoodies..

just another round of Friday night fun on the farm!!

or just check out this rad video of our Friday night fun theatre restaurant!