Like most heterosexual males I’ve been to my share of ‘gentlemans clubs’ and I’ve put a few bucks in a jug at a pub as birds of varying calibre do the rounds, usually looking unenthused, drumming up enough to do what I always thought of as a strip show. My first time at Schnitzel n Tits was a whole different ballgame.

Start with the crowd. Instead of crews of loud or weepy drunks at the tail end of a bender and single men with a furtive look and a fistful of fives this was an eclectic mix of men and women. Circulating were the babelicious barmaids, each in an individually coloured and superhero themed panty and nipple cover set. As I gorged on succulent schnitzel I felt a buzz of anticipation amidst the laidback conversation. Schnitzel n tits is not an afterthought; a ‘why not’ addition to a drinking session. These people came to see the Women of Wonder. They were not disappointed. First cab off the rank was Miss Nude Melbourne – Foxy, as Iron (wo)Man. She gave a delectable demonstration with chocolate sauce, inviting a patron to lap it from her breasts and bum. I didn’t see what she did with the baby oil other than take a bow because I was trying to tune one of the Babelicious Barmaids.

The statuesque Felicity Banks, who won Miss Nude Australia 2014 as Darth Vader came back from the dark side for Schnitzel N Tits and took the stage as Wonder Woman. The crowd broke into a spontaneous chant of ‘Wonder..Wonder’. She didn’t make us wonder for long. Blue sequinned hotpants detached to become a g-string of the same electric hue and the red wonder woman corset was removed to reveal spectacular cans with WW on the nipples just like Wonder Woman’s own..probably. To the strains of shit Christian rockers Nickelback’s ‘Hero’ Banks demonstrated the resilience of her wonderbreasts by splashing them with hot wax. Felicity seemed to be enjoying herself every bit as much as we were which made her my favourite, but.. 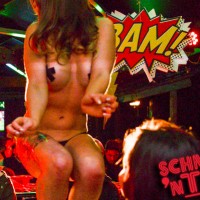 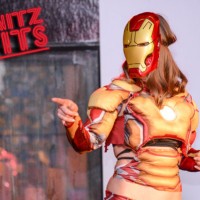 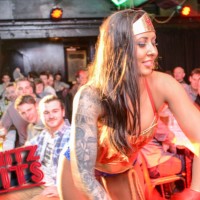 The crowd favourite was Isabelle Deltore – appearing as ‘The Bride’ from Kill Bill. We’ve all fantasised about what’s under that dope yellow and black figure hugging tracksuit and when we saw…Uma Thurman should be so lucky! Whilst her taut bod and copious ink are dazzling it’s Issy’s enthusiasm, nay wildness, that won the room. In her custom Nike stilettos she engaged in some racy cosplay; using her nunchuks on buck Mikey. The final song saw Deltore take a running slide along the the ‘goats and hoes’ table, spray herself liberally with lotion, get intimate with John’s phone then; when Dion chivalrously offered his beer, chug it and shotgun it into his mouth! The boys at this table were howling like wolves at the wonder of this woman! 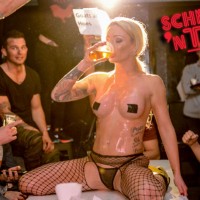 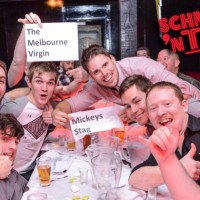 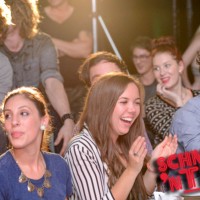 Bucks George and Mikey and their mates seemed to have lost motor control in their drink lifting arms. Luckily the babelicious barmaids were on hand to keep the boys hydrated with their breasts – administering therapeutic motorboats to keep spirits up. Female patrons were not to be outdone. Special mention to Izzy on the audience participation front who peeled half her dress off to reveal a sexy black bra before being straddled by Bella for a titty shot and a kiss – to her boyfriend and the room’s delight.

I had a blast at my first Schnitzel n Tits. Everyone did. More on the merits of individual babelicious barmaids in reports to come. Fitzy

You can find more photos of all this action here.