It was 5 days into spring but no-one had told Melbourne. I shivered in my Hawaiian shirt as I made my way to Brown Alley. Then I entered the warm island ambience of the Schnitz N Tits Luau and was Lei’d at the door by a Babelicious Barmaid. By the time I was filling up on Schnitzel and joking with my tablemates the chilly streets felt like a bad dream

Swinging September residents Kahuna Daddies played distinctive Luau Lounge from their Bamboo Tiki bar and braved crowd participation from Sam’s birthday party. The big powerline techs and live wires in the loud Hawaiian shirts got up for spontaneous maracas solos and a spur of the moment duet on the organ with Sweet Gary. The Daddies gamely worked it into their act. 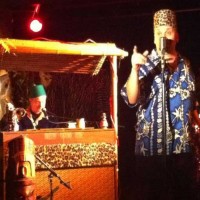 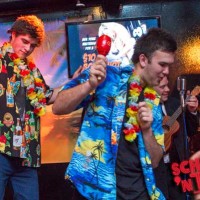 MC D-Train conducted a nail biting round of ‘whose boobs are those?’ Tony, the thorn who came with roses Kristelle, Anita and Jess, won a Schnitz n Tits t-shirt with his wincing identification of Jack Nicholson’s pouchy pups.

A big part of Schnitz N Tits fun is the crowd participation – people get dragged up (or, as the night wears on, rush the stage:) to compete for great prizes. Buck Dean and Tan of the dirty dozen from Telstra were tasked with undressing 2 Babelicious Barmaids, donning their grass skirts and spinning a hula hoop. Both boys had poor hip to hoop coordination but the crowd gave it to Tan for effort. Tan dazedly rated his prize of a titty shots and motorboats from the girls ‘the best experience of my life’.

Kaylee kicked off the shows. A highlight involved her hand-standing, hooking buck Dean’s head between (the big man getting involved again) her stylish stilettos and demonstrating the muscularity of her lovely legs by pulling him nose first into the ‘pie’..repeatedly. When she released Dean he playfully returned the favour – daubing Kaylee as he cleared the cream from his face. 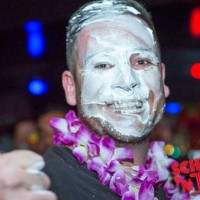 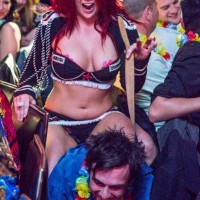 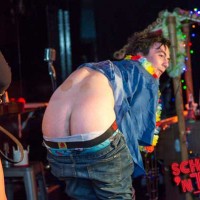 Hunter was to draw 2 more ‘slaves’ from the audience. Making Tan from the Telstra Business boys humiliate himself setting Kyle from the Batwings Div 1 soccer team on fire.

Tattooed temptress Cherry Lane began with demure flirty dancing to ‘California Girls’ but when her signature tune – Warrant’s ‘Cherry Pie’ – rang out she dropped the good girl act. We clapped along as buck Dean once again got a guernsey – helping expose Cherry’s inner animal. Cherry seemed determined to give almost everyone a cameo but had particular eyes for Carlos from table 5 and for the appropriately Island themed tattoos on Kat who massaged Cherry’s boobs with lotion in the finale. 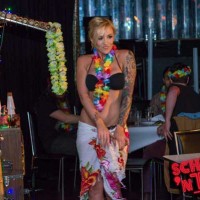 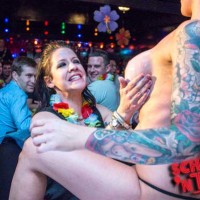 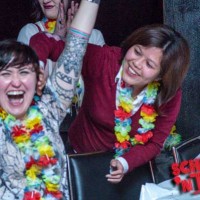 Congratulations to the Irishmen from The Badgers football team who were at Schnitz N Tits to celebrate a Division 2 premiership. See more of what we got up to  or book your own taste of hula heaven and troppo crowd participation when our Island in the Sun re-emerges from the ocean every Friday this September!! 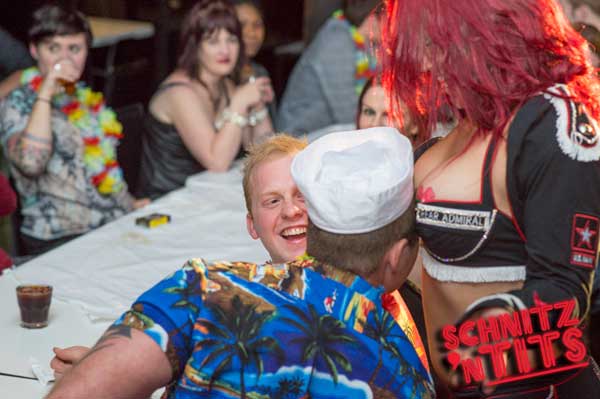