Let me tell you about these Hot Oktoberfest Girls… I took it as a good sign that I could hear the Oktoberfest opener from 2 floors away. The top floor of Colonial sounded like a Rocking Bucks Night at UEFA world cup, with the roar amplifying as I climbed the stairs. The crowd often add as much to a Schnitzel N Tits event as the show. The full house in attendance on this grand final eve had cleverly used the new public holiday for ‘pre partying’. Our hot Oktoberfest girls who become topless waitresses, loving the vibe, were whipping them into a frenzy! 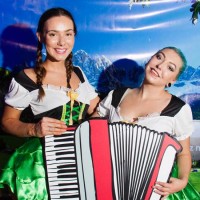 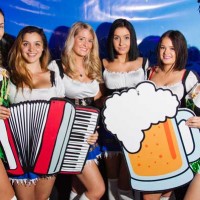 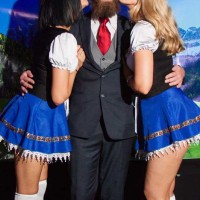 More new themed games got VIPs onstage with the girls of Oktoberfest.  After 4 lightning rounds of Grab the Weiner young Ben, in his pretty dress, was left in the dust. So too, sadly, big buck Dan – celebrating engagement to his sweetheart since 15 (or as James put it the only sex you’ve ever known). 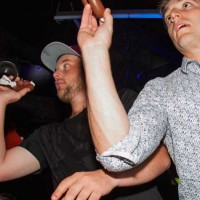 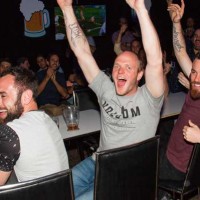 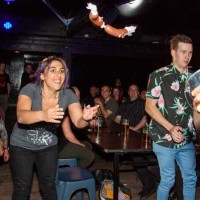 This left buck Adam and birthday girl Eva to face off in the final. I had some trouble following their complicated competition amidst the deafening cheers and re- emergent soccer chants.  I saw stein sculling, biscuit scoffing, balloon popping and bra removal then Adam raising victorious fists. Adam was awarded merch and tickets to Sexpo 2015. Eva, in her cool tight star wars tee, returned to her seat with a Men’s Gallery lapdance. She took a’ motorboat’ away from her sorrows. 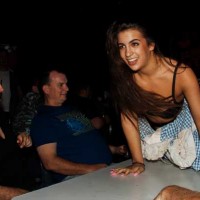 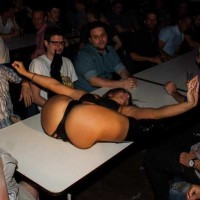 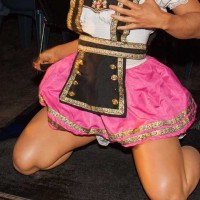 Eva – Party girl with the purple hair. Great sport and snappy dresser brought many mates for no particular occasion

What a night! 2 more to go before the Halloween Hotness of Friday Night Frights!